Entitled Policy Challenges in Life Courses of Social Exclusion, the Swansea training school was the fourth of a series organised by ROSEnet. It set out to engage with Early Career Investigators to examine links between theory and research in social exclusion and consider the policies and practices that could reduce social exclusion within their own countries and settings. 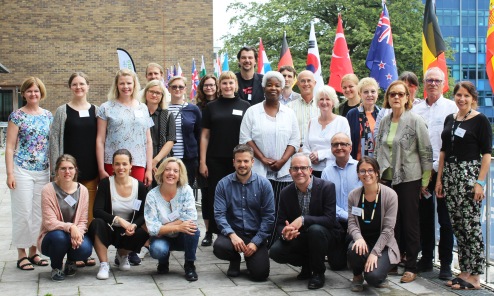 16 delegates from 11 European countries attended the training school, comprising a mix of PhD students and post-doctoral researchers. They were joined by an international panel of experts in social policy and practice who shared their expertise about pathways of policy development. Using a participatory approach throughout, they mentored participants to acquire the knowledge, skills and confidence to link their research to policy and practice. Ahead of the workshop participants were asked to do some preparatory work on a policy brief related to their own research; by the end, they were able to finalise these briefs and present them to other participants and mentors.

Two of the participants – Lise Switsers, a PhD student from Belgian Ageing Studies in Brussels, and Elisa Tiilikainen, a post-doctoral researcher at the University of Eastern Finland, took time out to give some feedback on the training school.  Elisa had been involved in organising the first training school in Helsinki, but it was Lise’s first time at such an event.

The training school gave a strong emphasis to taking a life-course perspective on social exclusion, a new concept for some of the participants. While both the participants we spoke to were already using this approach in their research, they had found opportunities to expand their knowledge. Lise said: “The conceptual frameworks that we were given were quite new to me and very interesting.” Elisa particularly enjoyed the keynote address from Professor Phyllis Moen (University of Minnesota), in which she explored the impact of unequal life-course pathways from the North American perspective.  Elisa explained that there can be differences between the paradigms used in European life-course research and those used in North America.  Although she was already using aspects of the North American approach in her research, listening to Phyllis’ talk had inspired Elisa to consider fresh ideas, for example from the perspective of gender inequalities.

We invited Elisa and Lise to reflect on differences and similarities between the European countries represented at the training school, and a key issue that emerged was ageing in place. While it’s addressed differently in different countries – in Finland, for example, it has a far stronger impact on state policies than the UK – ageing in place, and framing the different care needs, is something that comes up in every country. Also shared across all countries is a growing recognition of issues like social relations, loneliness, social exclusion and isolation, especially in sub groups such as those living alone and, coming to the fore more recently, carers.

The second full day of the training school focused on turning research into policy and practice with mentors Richard Humphries from The King’s Fund and Swansea University’s Gideon Calder. In order to influence policy decisions effectively, researchers need to be able to turn research findings into compelling policy messages, identify relevant policy makers and engage them. Elisa reflected: “I still haven’t found the answer to that – I try to explain that loneliness is a complex issue but policy makers want easy answers. It seems that many of those who have most influence in policymaking cut corners a bit and make things too simple and it can be a struggle to find ways of bringing out the complexity of the issues in a way that they will understand.”  During the workshops participants had considered how researchers might get more attention by timing their message to tie in with topics popular in the media, and the risks of the person with the loudest voice – but not necessarily correct information – getting heard. Elisa acknowledged that in order to get at least part of the message across, there could be a risk of compromising research integrity.  She talked of the pressure to be quick with bringing out findings and how this increases once someone is working on a number of projects as a post-doc.

A highlight for both Lise and Elisa was the presentation from the Older People’s Commissioner, Helena Herklots, on the first evening of the training school. Neither Belgium nor Finland currently has a similar role.  They were interested in the scope of her role, and impressed with the way she was addressing issues related to inequalities faced by older people as well as the way she delivered her message.

On Twitter the Commissioner later said “Delighted to take part in this. Thought-provoking questions and discussions on social exclusion, life-course perspectives on ageing, and how research makes a difference.”

So, was it worthwhile?

“I think it’s definitely worth it for the opportunity to network, to talk together around your research topics and to share difficulties.  I’ve picked up lots of knowledge from the presentations but I’ve also got even more questions than I came with!  I want to use these to help me go further and improve my work. It’s good to take a few days out from your work to stop, think and get inspired by different questions.”

“I agree. I feel that the networking and peer support from other early career researchers is so important, perhaps about half of what you get from attending.  When you’re working in your own university you see the same people, but an event like this gives a different perspective from people who are interested in the same issues as you and have fresh ideas.  No-one who hasn’t done it really knows what it’s like to be a PhD student, and that shared experience is an immediate way to connect.

“In the first training school we thought about whether we should set up an email list or Facebook group but it didn’t happen. If you know someone you can always email him or her and ask something. Maybe in ROSEnet more generally it could be beneficial for early career researchers to have a mailing list or some kind of social media platform to exchange thoughts after these types of meetings.”

Professor Norah Keating was responsible for designing the programme for the training school, as well as being one of the mentors. She said:

“Offering this master class as part of the ROSEnet international research network provided us at the Centre for Innovative Ageing a wonderful opportunity to host a group of early career researchers from across Europe. They have left with new colleagues who will become their collaborators as they build their research careers and with new understandings about the art and science of connecting with policy makers to reduce exclusion in later life. We at the CIA are richer for having worked with a fine group of ECRs and mentors. They give us hope for a world in which no one is left behind.”

You can also read about the 2018 ROSEnet training school in Why 14 early career researchers into social exclusion found themselves in Ljubljana.

2 thoughts on “Exploring the policy challenges of social exclusion research”

A blog about research, stories, activity and teaching at the Centre for Innovative Ageing (CIA), Swansea University